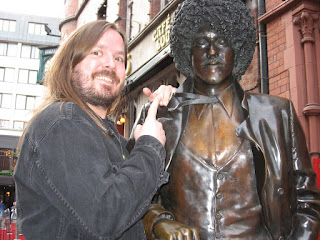 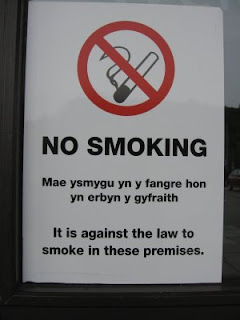 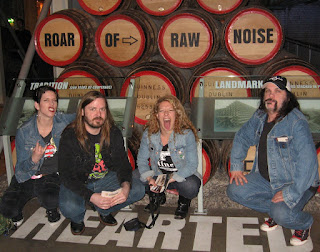 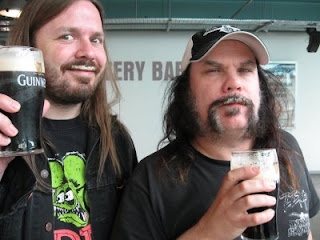 Swansea was a DUMP!!! Eddie Spaghetti said on stage the club was so sticky it's like the floor is made of DUCT TAPE! Fucking funny. I had to see how far I would get on my knee slide and I pretty much went about a foot before I stopped short. Pretty funny. We have another gig in Wales in a week - so we are not out of the fire yet. So far all in all England has been fucking excellent. We had a few shit shows - Swansea and Birmingham of all places (hard rock capital of the world practically, in the 70's) but Manchester was 'Top' and last night in Newcastle we were 'Mint'. Both nights we played SUPER early- like 7:30 - because it's the weekend and to quote Blaine - 'the entire country turns into a Disco at midnight'. Luckily everyone knows this so the rockers come out early for the show - and we all can go to the pub together while the children do the disco.

We are in Glasgow today- got here early and I have to say- the rock gods seem to be smiling on us because for the second time here - the sun is shining and it is actually beautiful out. I am doing an interview in the GUINESSS factory when we get to Dublin on our day off - so I think everyone is going to tag along for that one. Oh and yes, the quality of the Scotch has improved immeasurably already!

We had an amazing experience after the Birmingham gig. Our tour manager Simon pulled some magic strings and had one of the best Indian Restaurants in the world stay open late for us. Supposedly Chicken Tikka Masala was invented in Birmingham as well as Cobra beer. We didn't even order - they just started bringing us food. What a glorious evening. One of the dishes was Chili Paneer - a super spicy and sweet sauce over fried paneer cheese. Very much like that Indian/Chinese food we've been enjoying in Atlanta. Anyways we were ecstatic, Rogan Josh is one of my new favorite dishes - though I keep forgetting the name and call it Seth Rogan or Josh Rogan, check it out- it might just be British ...

Wish us luck - we are off to Belfast tomorrow! And the Hawks are in the playoffs starting Tonight!!!

Ruyter
Posted by Ruyter at 7:31 AM

Yo Ruyter and the rest of you bad-ass Nashville Pussy-cats!

Thanks so much for Saturday night in Newcastle - you totally rocked my tits off - and for signing my drum skin (twice!)... shame I didn't kiss your ass when invited!

Anyways I'm still buzzing! I'd like to send you a recording of my band - if you want to hear it drop me an email - I know more music might not be exactly what you want to hear right now, but fuck! How about if I say please!?

Ruyter especially: thanks for being so cool after the gig, its a shame I couldn't treat you to a decent single malt, but if you're ever back in this neck of the woods, give me a shout and I'll buy you a bottle!

Went to Manchester last friday was absolutely class.
then went to Birmingham last night for DC, superb.
Was angling at trying to get to York for tonights gig...but,Mrs would nt be too pleased!

Get to Sheffield next time !

Hello Ruyter, rock and roll baby. Theres nothing that can stop you now, except for maybe a sticky floor.

Carman from Stalwart, you know the place.....

Hey Carman!!! fancy meeting you here! We'll be back in Canada with Motorhead in Sept or October, let me know if you'll be around, would love to get you drunk again!