War Is Hell! I'm back from NAMM and off to Europe so let's Party! ATL Pussy Style!! 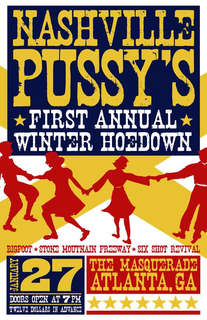 Hello Pussy Posse! We are sick of the fucking cold and we need to party! Atlanta needs a good old NASHVILLE PUSSY style party - with all our friends - so we invited some of our favourite local bands to perform at our FIRST annual event.
It's a Southern Rock Ho-down - BUT - This ain't your daddy's southern rock....but he can come too. It's NASHVILLE PUSSY Headlining, BIGFOOT (ex Artimus Pyledriver ex - Evils) and Stone Mountain Freeway (ex Artimus Pyledriver) and Six Shot Revival - who we just saw for the first time at the Clairmont last thursday and they kick ass.
It'll be a let your hair down get sweaty and get laid kinda night. This Thursday Jan 27th at the Masquerade! Be there!

It's our last blow out before we go to Europe for a month so come see us off in style! Dates right here.. http://www.nashvillepussy.com/shows

I went to the Lemmy Movie Primiere in LA with Corey Parks. Lemmy sat right between us two old pussies. Corey Parks and I did the Red Carpet like old times and promoted our new project together - the NASHVILLE PUSSY LIVE IN RENNES CD from back in '98 when Corey was still in the band. The New Rennes Live cd available ONLY here http://nashvillepussy.com/store?id=486 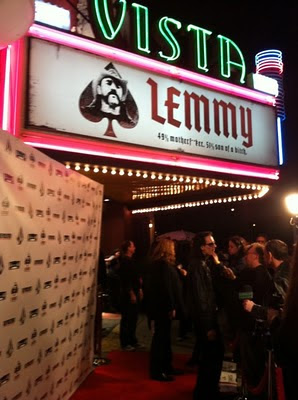 Pretty fucking good movie but it could use more footage of Nashville Pussy!! How can you go wrong with a subject like LEMMY- Lemmy is God. The Rainbow was lit up that night. I whiskeyd with Lem's son Paul, Sean Yseult and Chris Lee of Supagroup and even managed to get away from Phil Campbell before things got out of hand. 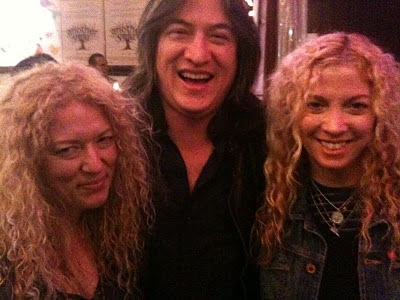 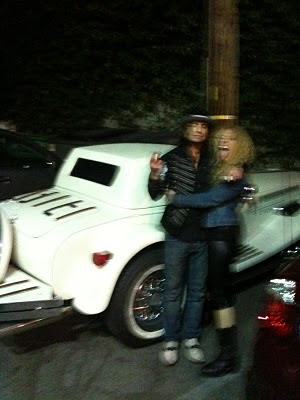 We finally finished tracking and mixing of the latest Dick Delicious and the Tasty Testicles album which I play and sing on along with Blaine and members of Mastodon and Brutal Truth. This New Album is INCREDIBLE - our first listening party produced a nosebleed! 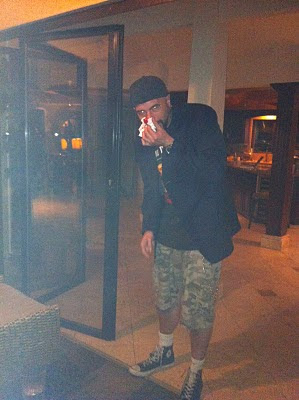 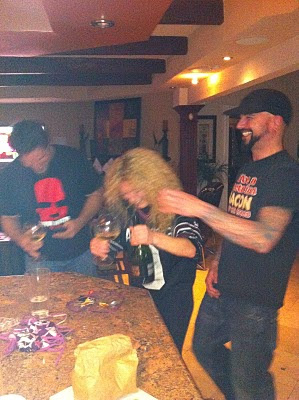 Not only does it ROCK - it's fucking HILARIOUS! 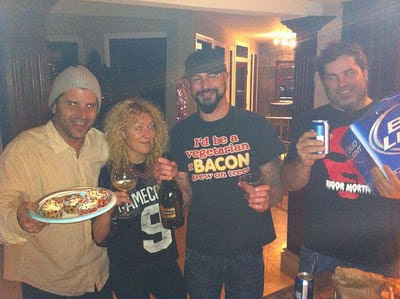 NAMM - was pretty incredible. Like Guitar Centre on Steroids.. Out of 80,000 visitors I managed to make a spectacle of myself as usual - I could not resist climbing up on that beautiful wall of Marshalls and getting a few pictures taken. Sorry to distract from the Mick Mars signing.... Within a few days I got an Email from Mr. Paul Marshall himself saying he'd love to see the photo with a 'lady' with Marshalls for a change from some sweaty arsed man.

Paul Marshall called me a LADY!!! 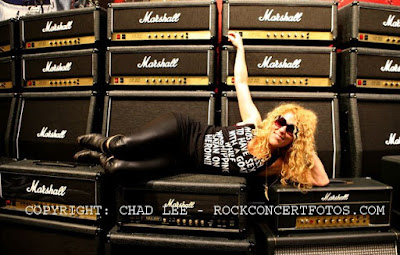 Yes, I'm STACKED!
Our good friend Michael from Fender is hooking me up with this Wayne Kramer MC5 Strat!! Gibson of course was awesome- Brenden Small of Metalocalypse was showing off his new Explorer- might have to get one of them too.. 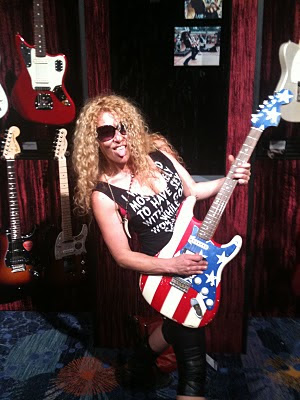 I hung with our producer Justin Z Walden (Korn, Sevendust, Guns and Roses, Dick D), Derek from the B-Movie Rats/Angus Kahn and Jay (aka Dick D.) from Dick Delicious and the Tasty Testicles and even wore a Dick Delicious dress that read 'I Was Voted Most Likely to Have Sex With A Goat While Worshipping Satan On Heroin'. Besides fiddling with all the newest toys I got stopped to take a lot of pictures and sign autographs. I was like Ron Jeremy at the AVN's; basically a kid in a candy store! We even met Rupert Neve! 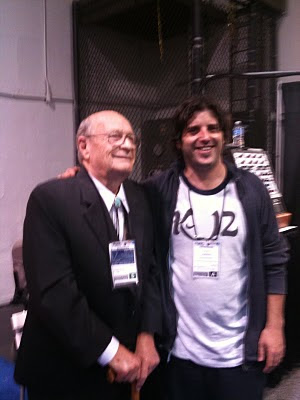 Mr. Rupert Neve and Justin Walden getting some direct magicc
We thanked him for making us sound so good. I wandered with our old A&R guy Tom Zutaut, said hey to Megadeth, Mastodon, HellYeah, and a pack of rockers... Hung out with the guys from SLAYER, sweet Dimebags Hag Rita was in charge of doling out shots.....whoopsy...so I'm not gonna say WE got kicked out of NAMM but... 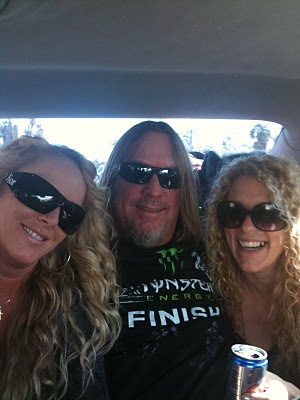 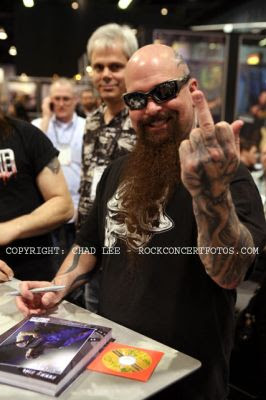 Kerry King says 'hello'
.....things got messy - our buddy was 'escorted with extreme prejudice' from the backstage of Dave Lombardo's signing after he (let's just call him 'Peter the Dickass') got so drunk he couldn't stand and fell right on top of Carmine Appice - at least he picked one of the best drummers in the world to wipe out on then roll on the floor past the curtain and pretty much straight out the door. After our graceful exit we drank into the wee hours with an endless open bar at the EMG party. Slayer's Dave Lombardo sang us all into submission with his rendering of 'We Are The Champions' accompanied on Grand Piano no less...fucking class motherfuckers. I cannot believe we are professional musicians sometimes.. well all the time actually. Thank you EMG - that rocked!
So yeah- NAMM was kinda great. War ain't hell-it just sounds that way.

see y'all down the road!
ruyter
Posted by Ruyter at 8:28 AM 4 comments: