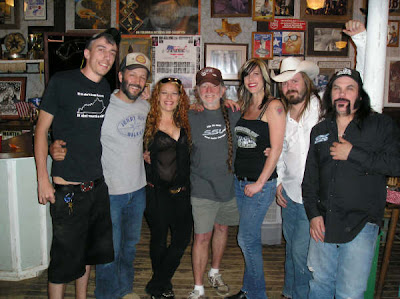 Okay- topper of all toppers, AFTER having FINISHED recording what is perhaps the greatest rock record of all time... or at least our time. The Nashville Pussies saunter over to Willie Nelson's old timey ghost town named LUCK, Texas. Which has been used for a buncha movies and videos with the provision that any movie using the property has to build ANOTHER fully functioning old timey building to add the town. Willie has his World Headquarters there which is basically an old timey two level building with a nice long wooden bar, poker tables, wood stove shoe shine seat and big screen tv and a stereo, oh and tons of trinkets of his travels. He has a wall that at a distance is merely and orange wall - then the closer you get you realize it's made up of a serious lifetime's collection of Orange ZigZag Boxes. We got permission to shoot some cool pictures with our buddy Judson who takes a helluva picture and drives a fucking cherry Roadrunner.
We shot a buncha beautiful pictures as the sun was setting, moseying down the gravel road with the chuch behind us, 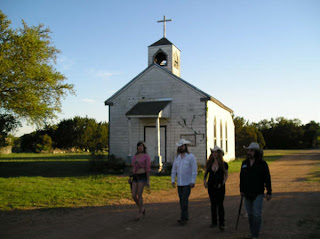 hanging out in the Saloon and looking 'no good' around the bank and eventually posing in the Hoosegow.. or jail. As we were leaving we had seen Mr. Willie Nelson himself arrive to his HQ at the head of the main street in Luck. We could hear him cranking out some tunes and saw him serving from behind his bar to some buddies that dropped by. Obviously we all wanted in there, hang with Willie - so Judson knocked on the door and sadi thankyou for letting us shoot on the premises and Willie said 'No problem, y'all smoke?'
The rest, my dears, is history! I'll leave you with - there was no more tequila and our cheeks were sore from smiling. He is a class act all the way and it felt a little bit like leaving Heaven as we had to say good bye. Sitting in the Bar with Willie Nelson enjoying his generous 'company' etc. and listening to his playing a recording of 'Sitting on top of the world' was very apt and true and as we left town, even though we were literally 'out of Luck' it sure feels like a lot rubbed off.

ciao amigos!
ruyter
Posted by Ruyter at 1:10 AM 4 comments: 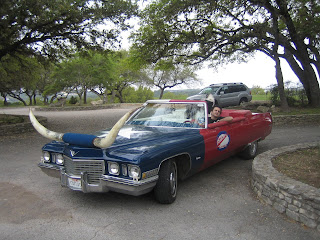 OK, we have been Haulin balls on this recording, not to get ahead of ourself cause we are day three and still have ONE song left to track. The weather, the people and the vibe have been condusive to some balls out rock n fuckin roll. Blaine has been hitting the Boone's farm for some serious inspiration and from what we've heard him singin so far, this album is going to make our last album seem like an asshole. He has seriously surpassed himself. We have to turn his vocals down so we don't hear what he's saying and accidently fuck up playing coz we're laughing so hard. Today is TRUTH day - every song is the Gospel Truth - all true tales from the front line.
I borrowed this awesome old Fender Telecaster for a couple of twangy songs. Remo's father Jerry was kind enough to lend it out for this album - though I'm not so sure he's gonna love what we've done with it! Nah, he'll love it. We been calling it the 'Daddy Tele' and I am slowly learning how to ride it. It's quite the singing beast - gonna have to get me one for the tour.
Yesterday we had an amazing suprise, turns out in these parts, they have a food we never have even though of in our wildest drunken depraved Caligula dreams, get this....... COUNTRY FRIED BACON! - it's true!! it was part of our regular massive order of food and I can honestly say, to quote our original drummer Adam Neal; 'I can feel myself dying with each bite'.
In rummaging around Willie's pad, I found an old Golf Score card of his from '94. I'll get the picture up here soon cause, it is pure comedy. He won, is the short story, the Rules are another... that man's got Moxie.
Today we met a dog that plays the fiddle.
I ain't lying, she rides around in that Horny Texas flagged 'Cat a lac' that Mr. Daniel Rey is a settin in in the picture. The cute puppy behind him is Molly, who has been on Conan O'Brian, no shit! I'm jealous of a dog, for Conan, the Car AND the damn fiddle playin!!! I think we're gonna have Molly sit in for a solo tomorrow. I wish the Georgia Flag was car-able.
OKAY it's a few hours later from the last paragraph and after a bunch of takes and some serious options on how many hours the solo should go on for, we got a rediculously take on our last song!! I wound up on my back on the floor playing with my fingers on Daddy's Tele! Thank you Jerry! I hope to have done you proud. We'll have to get you an instrumental version so you can play it for your friends without having to explain all the cussin' n comedy.
We heard that Willie was playin golf this morning- but that was this morning and we were still sleeping off last night. We saw his stage manager (the famous Poodie, who has his own Hot Mustard!) now that's class! his bar is just a few miles down the road so we'l probably have a celebrate there when performance warrants a reward. Until then we'll be ordering Opie's Bar B que and laying down greasy tasty tracks with Sticky Saucey Fingers. I finally know what the Stones meant, they must have recorded in Texas.
Posted by Ruyter at 7:18 PM 5 comments: