HELL YEAH! What a fucking riot! Sturgis was everything I have heard and more! Thank god we got there a day early to get some serious local flavour and see what the fuss is all about. 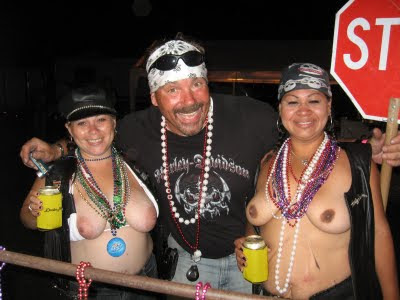 Ok - for those of you who don't know STURGIS is a tiny town of not many thousand people that gets literally invaded once a year by up to 500,000 bikers, many of them on bikes! It is in absolutely beautiful South Dakota and really is the perfect place for riding a motorcycle. Georgeous scenery and friendly locals. We heard most of the locals dissapear during the rally and as soon as they're gone the grocery stores are full of old ladies who have been in hiding for the duration. We lucked out and happened to have one friend who introduced us to many friends and gave us the royal tour. We hung out in Glencoe the campsite and got to ride on one of the most amazing machines I've ever witnessed. A fucking motorized couch! 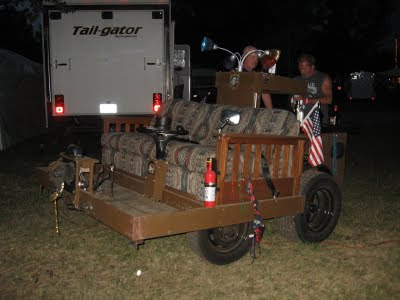 No Shit! Seems this bored genius decided to combine the chassis of a VW bug with a couch and a bar - this is the DRUNK DRIVING MAN in person!! The steering wheel even had a drink holder. George Jones would have been jealous. We got to see lots and lots of boobies and even a few weiners there in 'Titty Alley' that night. 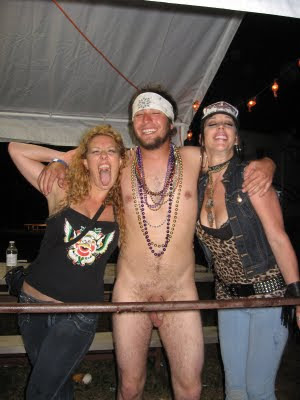 Everyone goes all out- it's kind of a hillbilly mardis gras but instead of floats - people make crazy rides out of anything, anything that'll tote tits! - one guy had buit a pirate ship with three stripper poles and plenty of ladies putting on a show. I saw a motorized beer cooler equipt with alarm and siren. 'Bikers entertaining bikers' was how it was explained to me. It was entertaining for sure. 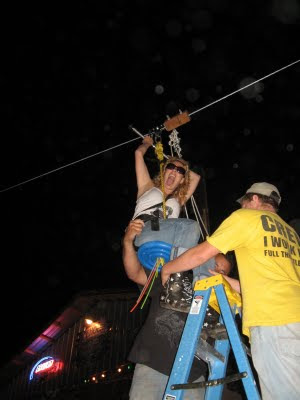 We wound up at the Full Throttle Saloon to get on the zipline over the crowd. Again, some bored genius decided to buy an old bridge and run a zipline over the crowd to another old bridge - all this OVER the open bar which held at least 5,000 people. It turned out our old buddies the Last Vegas were on the stage as I was flying over the crowd on the zipline. We wound up back at the campsite in a zuchini, I mean, jacuzzi being pulled through Titty Alley. Me and a pile of half naked ladies driving down the dirt road sloshing water all over the onlookers and security guards. Not bad for the first night!
The next day we got to see the actual town of Sturgis and all the bikes lined up and all the campers on peoples lawns. We finally made it to our gig at the Broken Spoke - another massive Saloon out in the hills. 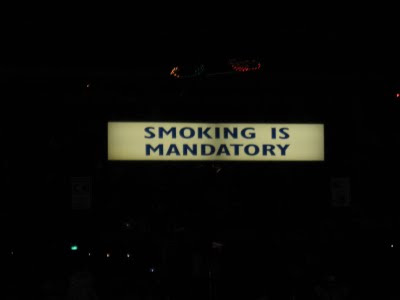 The show went great and we got to play in front of another pack of Virgins for the most part. Nashville Pussy Virgins that is... There was a VIP lounge to the side of the stage and they nearly broke through the floor rocking out to our set. We had a blast and a bunch of our new buddies from Glencoe came out to see if what they heard about us was true! 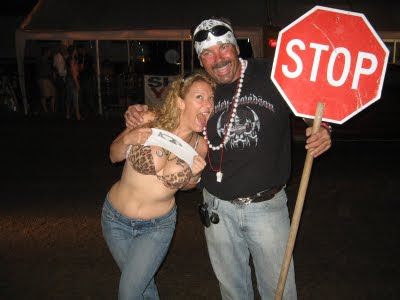 Once the glad handing was over we made it back to Titty Alley for a few more runs on the Couch and a couple of strong rides on the BUSHWACKER, (a very lady friendly blender, let's just say...) 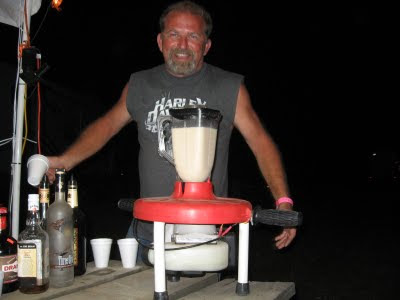 We ran into Some of the guys from BlackBerrySmoke who'd played with Jackyl - lucky fuckers... and Yeah, if you haven't heard - Steven Tyler fell off the stage at the Aerosmith show at the Buffalo Chip campground. Cheech and Chong even played!
All in All - great time had by all- I got Bushwacked to say the least. One of those Blenders might be nice company when Blaine's on tour.

Thanks y'all for the ball. and the balls!

see y'all down the road
Ruyter and the Pussies
Posted by Ruyter at 9:35 PM 4 comments: