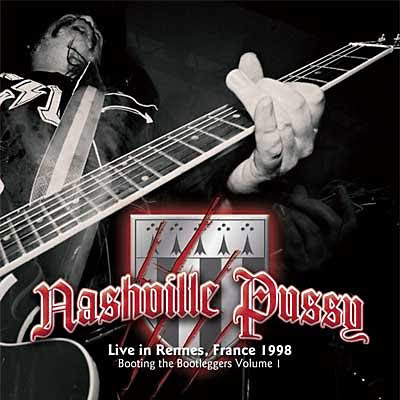 Hey Pussy Posse! How the hell are y'all? Merry Christmas and Happy New Year! LIFE IS RAD!

If you've been on Facebook or were lucky enough to actually be there - you already know the tour of CANADA was fucking crazy. Our Karen had a family emergency to attend to. Her step mom passed away and Karen had to leave the tour abruptly. We enlisted the services of none other than Mr. EDDIE SPAGHETTI of the SUPERSUCKERS to fill Karen's sexy shoes. Needless to say- it fucking rocked. Eddie stepped up and had a blast playing on the sideline for a change and got to show off some sexy moves that only work when you're the newest PUSSY. We even learned 'COATTAIL RUYTER' to make Eddie work even harder.. 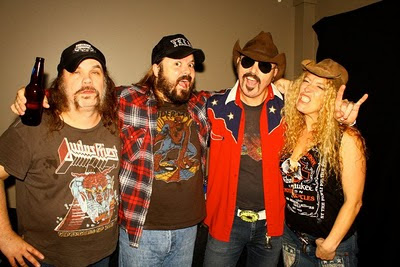 Halloween in Calgary was completely fucking retarted. Of course we did it up like we always do... Blaine was the Frito Bandito, Jeremy was Mr. T and I had to go as our local prodigal son Michael Vick. Eddie is new to the extreme Halloween PUSSY STYLE but wound up putting on a pretty good Zombieish thing. We recorded the show - so MAYBE it'll be good enough for human consumption one day. It was a blast- but not so easy to play with shoulder pads I gotta say. Our roadie Bobby went as a Gay Freddy Krueger 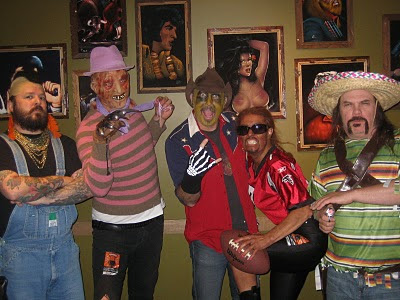 Sweet Edward Spagedward had to vacate the Pussy for his own solo tour so we had to enlist yet another Bassist of superior calibre - none other than ZEKE's own Jason Freeman who did and amazing 'FUCK YOU' solo Every night with his middle fingers! Jason kicked ass and was great to travel and party with. 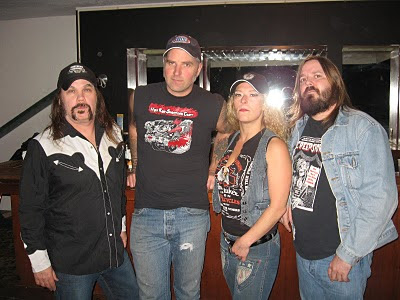 At long last we rejoined with the lovely Karen for the last two shows and even got guest singer Erica Brown on NUTBUSH for our final show of the tour in Denver! She kicked it up a notch - what a blast. 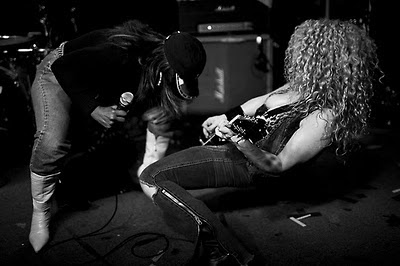 Since we came home - Blaine and I have been insanely busy. We have a few other studio projects that have kept us recording for the last couple of weeks.
We started a record label. SLINGING PIG - our first release is being shipped out to fans right now. We found an old NASHVILLE PUSSY bootleg from 1998 'LIVE IN RENNES' and was blown away by the quality. It is a ferocious performance and exceptional recording of a really early show. NASHVILLE PUSSY'S first tour of Europe I believe. We played this Festival in Rennes and just destroyed the audience for Pere Ubu who came on after us. We are doing this on a super low level - it is a DIY as FUCK fan only release. It ain't in stores, it ain't on iTunes. It's website only! The pre-orders have been shipped out and now we're taking regular orders. If you dig the pussy - you'll fucking flip on this! No Shit - I couldn't be more impressed with our own performance and you know how much I hate listening to myself-I could play this over and over and over again. Jeremy and I are on complete MINDMELD and play off eachother so tight it's like we're twins speaking our own language with volmue. Corey is holding down the bottom and Blaine is on fucking fire - he's like the ring leader of a three ring circus. It sounds like we are trying to kill the audience (not much has changed). Anyways- get it while it lasts. It's a limited pressing..

Get it here! http://www.nashvillepussy.com/store (scroll to the bottom of the page)

Hell it's Christmas - get it for yourself this 'cause I know no one got enough PUSSY FOR CHRISTMAS!

We have new Euro dates announced on the website and yes, we are finally playing Atlanta! http://www.nashvillepussy.com/shows

See y'all down the road!