We are here at the beach! Chile was kinda chilly. Great show, blew their minds. Did an encore, partied all night then flew here.

Sao Paulo is 17 million people. The city with no end they say. Our hotel is next to the club and there are hookers and sex shops every foot. Some whore houses are 'disguised' by being 24 hour barber shops but they ain't fooling anyone.

We got into the city around 9 at night and had a fabulous meal of local delights. Lots of empenadas, beef stews, rice and beans. dried Salted beef with onions and 'Halloween fruit' that had cheese in it and tasted like good cheesey grits. Today we drove to the beach. Down a crazy mountain past a giant Peteoleum city that was disgusting. And past cities of ghettos called favellas. Where it is supposedly super dangerous and they sell crack.

We spent hours walking on the beach and ate some great seafood and drank caprianahs. While watching guys play futball. Blaine was all excited we were gonna eat squirrel but the translation was wrong and it turned out to be only squid! We'll probably have to go back to Georgia for the squirrel. Now we are settling down for spaghetti with three sauces made by one of the girlfriends.

We have pretty much three days off. Two at the beach apartment and one in Sao Paulo when Blaine is going to DJ in the city and we get to watch!! 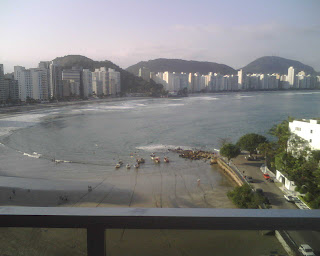 This is a photo of Guaruja, the beach we are staying at for a couple a days!

So far so good, and it is good, bon viaje indeed.

Ruyter and the Pussies
Posted by Ruyter at 10:13 PM 11 comments:

From North to South!

Hello everybody!! I am writing to y'all in the airport in Miami on our way to glorious Santiago Chile!!

We just had a fantastic fucking quickie in Canada! Whistler as usual was a complete blast, they got no snow up on the mountain so all the permanent victims of that town are hungry for the rock. The opening band Fireflood were very metal, very Judas Priesty but with hot straight boys instead.

Calgary at the Snatch bar was THE best Calgary show we have ever had. The place sold out by midnight and we had 1100 fans of rock to party with. Nashville Pussy was the entertainment for one of the biggest tattoo conventions in North America. People were there from all over the world so our audience was full of diehard Pussy fans and a shitload of virgins. The crowd was crawling with super hot chicks and freaky dudes. Mr. Pink Suit turned out to have his own reality show about a rock n roll style barber shop where regular customers have their own beer steins stored for their next haircut. I swear every next person had a tale to tell.

Kat von D. was the big draw for the fest so a bunch of those TLC fuckers were there. We met Pixie who is on LA Ink also. She seemed totally cool for someone who has to deal with cameras in her face all the time.

If you read my first blog you know Jeremy was in a Smokey and the Bandit style road race to Texarcana. First prize was a Trans Am.

I guess they had to scavenger hunt photos to prove they had done the whole trip. One of the items was a photo of two guys in matching cowboy outfits. Jeremy and Tom and Adam actually managed to convince two guys in a western wear shop to get done up in their goofiest matching outfits to pose for the shot, turquoise shirts and those licence plates real cowboys use for beltbuckles. Not to be outdone Jeremy wore his tuxedo t shirt, a cape, a top hat and cane with little white gloves. Tom and Adam had matching Dickie coveralls with Tom wearing his Easy Rider red white and blue motorcycle helmet and Adam wore a ten gallon hat and a fake mustache over a drawn on sharpie mustache. One of the scavenger photos was of a bar brawl and Jeremy said they almost started one walking into a bar dressed the way they were. Unfortunately they lost the race to a bunch of savvy chicks from Atl who had a GPS and nailed all the scavenger points but fortunately the first prize car our boys lost was a piece of shit spray painted Firebird that no one even wanted to ride in and wasn't even bolted to the frame. Remo said the windows wouldn't roll up and were kept from rattling with napkins stuffed between the glass and car door. A real classy ride.

Ahhh a good time had by all. I will try and convince them to post some photos cause it sounds like a fucking hoot!

Our last show in Canada was in good ol' Edmonton and went real good but it was the end of the lo-ong weekend and everyone rocked out but was pretty burnt out. 'the weekend was showing...'

So now we sit at the Miami airport watching Osama on CNN because he dyed his beard for his new video. Blaine says he was at our show in whistler but snuck out before the encore to go boarding.

We have five shows in South America, they keep changing our schedule, but it looks like we play Santiago Del Chile, a few days on a beach, Sao Paulo, Goiania, Sao Paulo again and Belem and back home. Sounds like a great time. Any tour that has the words 'beach day' right on the itinerary is good with me! I talked to Lisa from the Bellrays last night and she said Sao Paulo was fantastic so we are ready for a good time. Lemmy told is that Brazil is the most rock and roll place on the planet.

We'll let you know! We are now on board the plane and will wake up in Chile. !buenas dias y hasta manana!

Ruyter and the Nashville Pussies
Posted by Ruyter at 8:46 PM 7 comments: