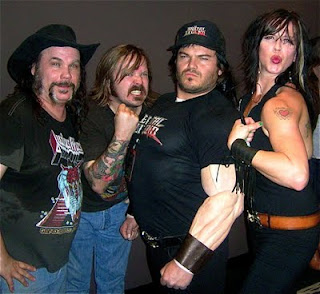 Hello Pussy Posse!! We are home after one of the best tours we have ever embarked upon! what a fucking blast. I hope the ringing in my ears never goes away. This whole tour was invigorating. We're all going through withdrawls I think, I know I am.
Since my last Blog we played AUSTIN which was fantastic. Stubb's rules and we got to watch the bats do their nightly exodus from under the bridge. WOW! Like 45 solid minutes of Bats flitting out to wreak havock on the night bugs. Plus it was our buddy's Christina's birthday so we all wound up at her house to get smashed, literally - Our Buddy Billy (who's got no legs) somehow managed to bust a Lamp cover 10 feet off the ground. Kudos Billy. All of Texas was off the hook.
Canada was extra incredible. Friendly border crossings, perfect weather and a shitload of fans and friends and even a bunch of my cousins came out. I even got to reintroduce my parents to Lemmy in Vancouver. My father bears a striking resemblance to Lemmy's tech Tim. (I don't know who to feel more sorry for.) My old boyfriend who first turned me onto Motorhead got on my list in Seattle and we had the pleasure of sitting in Lemmy's court for an hour of drunken puns and historical references. I was wearing his Motorhead shirt when I was introduced to Blaine (who was also wearing his Motorhead shirt) otherwise, good chance none of this would have happened... 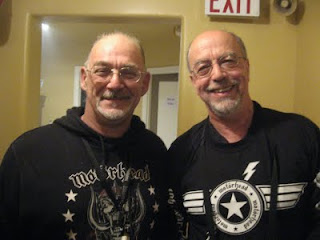 Blaine had the honour of introducing Jello Biafra to Mr. Lemmy Kilmister in San Francisco. Jello's 'friend' kept pestering Lem about if he was into D and D and 'gaming' and when Lem said 'No, definitely not' Jello said, in that voice of his, "So ends the Age Old Rumor of Lemmy Kilmister playing D and D". 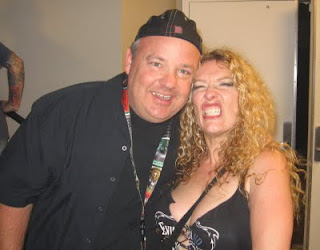 The imfamous Tenacious D made it out to the Los Angeles show. Jack Black Showed off his new foam rubber 'guns' as he took the stage as roadie Eddie Riggs -a video game character he's promoting, to the point of hijacking the stage in between acts at the Motorhead show. Lemmy's son Paul even joined Motorhead onstage for Overkill. Backstage in LA was mayhem, Motorhead gave out 300 backstage passes so the place crawled with rock stars and security. 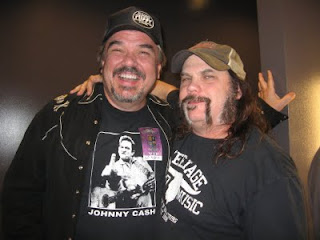 We got to hang with our Kentucky kin Earl Brown from Deadwood. He was also the retarted brother in Something About Mary.. you remember.. 'Franks and Beans!' but best of all he played MEATLOAF in the biopic. One of our old bass players, Corey, was in the opening band in LA and Blaine joined them on stage to do a cover of 'Mississippi Queen'. Lemmy gave him a '10 out of 10!' (Blaine wrote the words on his hands just in case...) 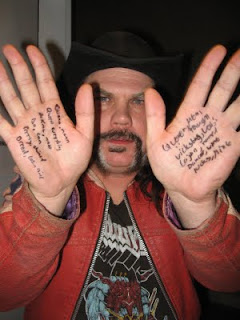 Whitey, Iggy Pop's crazy guitarist was there AND Phil Campbell introduced me to Carmine Appice from Cactus and Vanilla Fudge and Jeff Beck! WoW! 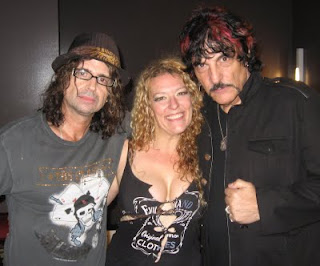 The last show in Vegas proved to be a slight letdown. Motorhead had to cancel because Lem's voice was shot to hell. Probably all 300 backstagers wanting to chat him up the night before! Regardless we still played to the packed house that turned up. Then in fine Las Vegas fashion we partied at Frank's Tiki Room until the sun was well up into the sky. ugh!

We went to ACDC as a nice reward for a tour well done, as usual they are stellar. Always raising the bar of energy and the blues.
We have only one show booked!! DENVER for Halloween! We have a tendancy to dress up so if you wanna join us for one helluva blow out, this one will be worth flying in for. It's at the Bluebird and will be our last show in North America for quite some time. Come out and dress up!
See y'all down the road
Ruyter and the Pussies! xox
Posted by Ruyter at 10:08 PM 7 comments: